The well has finally been permanently shut down as of September 19th. I finally believe it. Took longer than letting the Super Bowl victory settle in as a reality.

But the reality is NOT that 75 % of the oil is gone. (For the record, the spill was estimated at 206 million gallons so 154.5 million gallons disappeared? It sure as heck wasn’t cleaned up) Our local industries and people are NOT back to work. BP has NOT made the victims “whole.” To the contrary, BP seems to be spending considerable time and energy avoiding their self-proclaimed obligations. Not only have they failed to pay the majority of claims thus far (think if your mortgage were due and you hadn’t made money in months), but they’ve actually failed to reimburse local businesses for services supplied during the clean-up “effort.” Hotels and restaurants and several other businesses supplied goods and services and BP skipped out on the bills. Many are suing in hopes of recovering some of their losses for their good-faith outlays.

BP let those people take on the financial hardship of paying for food, laundry, utilities, staff, and all that housing and supplying a massive clean-up entails. They took advantage of people whose businesses would have been empty because of the damage they caused and left their bank accounts below empty.

I even heard that they skipped out on reimbursing a charity.

Not long ago, a man ran into the Gulf to save a drowning 2 year old girl. Both the girl and another samaritan drowned but the would-be rescuer is now sick from the pollution. Because of the use of dispersants, no one can even guess the extent of damage his heroic attempt will create.

Since I was very small, I’ve always trusted 60 minutes to provide in-depth unbiased reporting, but last week, Morley Safer characterized the victims of BP’s gusher by saying that, “[Mr. Feinberg] is seen as a penny-pinching scrooge, when they wanted a beneficent Santa Claus.” As Stuart Smith asked on his blog, “Would Mr. Safer have said this kind of thing about 9/11 victims?”

I’m not sure why the unprecedented pollution of the Gulf, the death of 11 men, and the deaths of millions of fish, birds, dolphins, sea turtles, whales and the destruction of the wetlands is not cause for national outrage. I’m not sure why no one from MMS is in jail after they spent tax dollars on hookers and meth while letting oil companies fill in their own safety reports. I’m not sure why BP was allowed to be in charge of their own crime scene. And I hope I’m wrong about why Morley Safer is reflecting a national stance on the victims of this catastrophe. But, I remember during and after Katrina, there was a lot of blaming the victims going around. I heard everything from New Orleans brought it on themselves through their debauchery (and yet Vegas remains), to it’s their fault they’re on their rooftops begging for water for days in the United States of America because they didn’t leave (though many had no cars and nowhere to go and no money).

I fear that people outside of this region, even outside of the South, see Southerners as ignorant, slow, lazy people who live in trailer parks or the hills and have sex with their cousins. There, I said it. I’ve heard too many jokes, political comments and general gossip not to believe that the stereotype exists. Many of the people of Gentilly, the 9th ward and other hard hit areas had owned their homes for generations. Some of them were the children’s children’s children of freed slaves who’d earned that piece of land with the sweat of their brows.

I’ve found the people of the South to be hard-working folks who know when the workday is over. They may not burn the midnight oil, but that’s because they’d rather be Bar-B-Queing with the family. And people here take pride in their heritage. There are 3rd generation bartenders in the French Quarter, 6th generation oystermen at the Gulf. Unlike the greedy, childish whiners they’ve been called since huddling for safety in the Dome, most would like to have their jobs back, not an oil-stained check in the mail. I feel like Matthew McConaughey in A Time to Kill. Think of millions of gallons of oil gushing uncontrollably for months, killing 11 men and chunks of wildlife, now think of it happening to New York.

Now think of it happening to you, because it’s happening everywhere. Yesterday, 180 million gallons of toxic sludge flooded Hungary and turned the Danube red. They immediately dumped plaster and acetic acid, an acid that gives vinegar it’s taste and smell, into the river to neutralize the pH. Already, they’re estimating it will take over a year to clean.

But here, they tell us 75 % of the oil is “gone.” Doesn’t give me much optimism for any further plans to clean the Gulf. On Wednesday, the National Oil Spill Commission revealed that the White House budget office denied a request from NOAA to tell the public the worst-case scenario numbers from the gusher back in April or May.

I suppose it would be easier to think that the worst is behind us, that I can trust BP to make the people of this region and their industries whole but I live in a city still rebuilding after Katrina and I watch the national news babbling on about witchcraft and Lindsay Lohan, waiting for someone like Anderson Cooper to “keep them honest” and am left scratching my head. No one’s going to jail for the greed and bad decisions that went into this catastrophe. No one even seems to be answering for it. And it’s still not clear, even to our local parish presidents, who’s in charge of the dwindling clean-up. And not to deter anyone from spending their tourist dollars in our wonderful region because we have plenty to offer, but here’s Philippe Cousteau on one of our beaches. 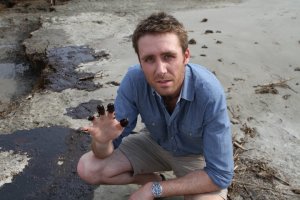