Last week, I returned to Los Angeles for the premiere and cast & crew screening of Quentin Tarantino’s Django Unchained. I’d heard a lot about the film from various people who’d been to previous screenings there and in N.Y. and was very excited to finally celebrate all of our hard work. I play Leonardo DiCaprio’s sister, Lara Lee Candie-Fitzwilly, a hoop skirt-wearing southern belle who’s quick with a smile.

The best part of going back to L.A. is getting to see so many of my old friends and have a nice meal on the patio of Mel’s Drive-In at Sunset Plaza (which we did 3 times in 2 days). I attended a party for a 5 year old who chose a slumber party theme despite the early hour. Kids grow up fast when you only see them once a year. We got to hang out with the talented bunch from Vintage Trouble fresh off their appearance on David Letterman where they were the first band to be given an encore in decades. I even did a podcast for Geek Nation which I believe will air this coming Monday.

But the point of going was to enjoy the reunion of all the Django-ites and finally watch the movie. Though we were certainly biased, the audience loved the movie and despite the length, the film seemed to fly by. I suppose that many readers already know that our hotly anticipated premiere was cancelled. I’m so sorry that no one got to see my beautiful dress provided by Lisa Iacono. A newcomer to New Orleans, she moved here from New York and came up with a great dress I couldn’t wait to show off. Alas, it was not meant to be but you can find a shot of me in my hotel room below.

Though L.A. has its charms and most of my friends, I was so happy to be on a plane pointed home watching people board wearing fleur de lis jewelry or Saints gear. We attended another cast and crew screening at the Prytania the next day. That’s 3 times in 4 days – and I love the movie more each time. Tarantino applied his immense talents and imagination to a movie with horses and hoop skirts, shackles and slaves – and it’s amazing. I’m so very proud to be a part of it.

For the record – I did my own stunt (6 times). When you see the movie, you’ll understand why I feel the need to mention it. Django Unchained opens on Christmas Day. Be there and be blown away! 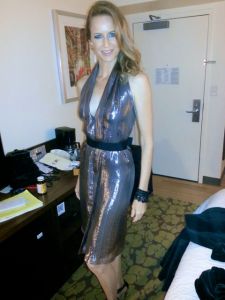 me in dress by Lisa Iacono