The Big Easy to the Big Apple

When I was starting out as an actor nearly 25 years ago, I first went to New York to study. I had almost no experience and absolutely no idea what might lie ahead for me and my new career. The Wednesday after Fat Tuesday, with a global hit movie still in theatres, I returned to the Big Apple to promote Django Unchained and my new book, Know Small Parts: An Actor’s Guide to Turning Minutes into Moments and Moments into a Career. I’ve revisited the city a few times in the intervening years but I continue to be astonished at all the changes. Neighborhoods I avoided as a young woman alone in the city are now cluttered with shops like the Gap, H&M, Coach and my dearly missed Trader Joe’s. It’s as if a giant broom swept the crime and grit, pushing it further and further uptown.

My first day in town, I attended a reception and play at my alma mater, the American Academy of Dramatic Arts (AADA). A friend of mine from L.A. was in town for the last few hours of her trip so we met before her departure and marveled that 2 friends from L.A. and NOLA would meet in NYC. I was hoping for a slice of pizza from my old haunt, Bella Napoli, next door to the school. The block has changed so dramatically on one side that I had trouble getting my bearings but some things do stay the same. With no frozen ingredients, Bella Napoli offers a great slice at a reasonable price and Joe and the guys couldn’t have been any nicer.

We met with Ashley Lanaux, my publicist and fellow traveler for this big adventure, then headed into the place were it all started. Like the city, the 125 year old school was the same but different. Fitting I guess – I am the same but different as well. I got to see my first teacher, Jackie Bartone, and thank her for inspiring me to double-down on my commitment to acting. We took our seats for the show we’d come to see and started talking to the guy seated next to us. It was super-warm in the theatre and after a long day of travel after 3 weeks of Super Gras, I feared I would fall asleep. I mentioned that we’d just come from Mardi Gras and he said he had as well. Turns out, he’s Sam Robards and he plays Tim Feeney, Kim Dickens’ business partner on HBO’s Treme. Extremely small world.

When I took the subway earlier that day, I noticed how quiet it was compared to a bus or streetcar in New Orleans. In NOLA, if even one person is riding the streetcar, a conversation is likely taking place. On the NY subway, with people jammed like sardines, no one spoke. But, that night riding home, there was a new sound. Every time the doors would open, you could hear someone playing music. On the second stop, the doors opened and I heard the familiar refrain of Second Line, a song so much a part of our city and culture that they play it in the Dome whenever the Saints score a field goal or extra point. I smiled and didn’t care if people wondered why.

The next day, Valentine’s Day, I taped an episode of the Better Show. While waiting in the green room, I got into a lengthy conversation with another guest about the movie, The Notebook. He was a producer with another Nicholas Sparks movie opening that day (Safe Haven) and I told the guy how I hadn’t wanted to see The Notebook, that I thought it wasn’t my cup-of-tea but that I ended up loving it. Later, the guest mentioned that he was also a writer so I asked what he’d written. The Notebook. Ahhhh. I have to say I thought Valentine’s Day was a pretty perfect day to meet the modern day king of romance. Afterward, we had lunch at P. J. Clark’s, a Big Apple favorite since 1884 famous for their oysters on the half shell.

Friday brunch was in the super-quaint Penelope. Though I really wanted to try the French Toast with fresh brioche with caramelized bananas ($10), I was happy with my eggs and bacon and they served great breads. Afterward, I got to do a Q&A with the students at the American Academy sitting on the very stage where I used to perform. One of my favorite quotes is from T.S. Eliot:

“We shall not cease from exploration
And the end of all our exploring
Will be to arrive where we started
And know the place for the first time.”

As I looked out into the faces of those students beginning their journey, telling them stories from my years since attending AADA, I felt reconnected to my own youthful enthusiasm and aware of all my intervening experience. I can only hope they got as much out of the experience as I did.

That night was a busy one with a party for the Louisiana International Film Festival featuring Lousiana-born Jonathan Batiste and Stay Human. The band brought the NOLA spirit to the Big Apple, spilling out onto the street to entertain the crowd waiting to get in. I left the party in the middle to be interviewed by Artie Lange, bringing him beads I’d caught from Bacchus, d’ Etat and Orpheus during Mardi Gras. Surprisingly, he had beads for me as well with the show’s logo on one side and his smiling face on the other. Though he never noticed my Saints helmet earrings, he seemed to love New Orleans. By the way, their set is a super-cool man-cave complete with a photo booth, pool table, basketball toss game and gorgeous twin blondes with sweet hearts and plenty of moxie. I had a blast. The weather had gone from cold to bitingly brutal while we were recording the show but I made my way back to the party for more NOLA jazz and good times with Jeff “The Dude” Dowd, the inspiration for the The Dude in The Big Lebowski.

After a very long day, I went to take my boots off and found the most inexplicable thing – a blinky gummy ring encircled my heel. Even on St. Charles after a parade, it would be difficult to get something so squishy up onto my heel like a finger. But the stupefying thing was that there are NO blinky rings in Manhattan. There were none at the party or the set and I can only guess that the spirit of NOLA placed it there when I wasn’t looking to bring me a smile.

I laid low most of the weekend with an interview here and there and a walking trip past one of my old buildings. I talked to a guy hauling a standing bass on the subway and it turned out he was scheduled to play with Jonathan Batiste soon as well as 2 bands at Jazz Fest. Another small world moment. The trip ended with a gathering hosted by The Dude at an amazing rental with 2 kitchens, many bedrooms, a back patio and even a laundry room. Walking there, I unexpectedly passed the last theatre I performed in so long ago, the Lucille Lortel Theatre in Greenwich Village. Oddly, the theatre was also featured in the Friends episode I did in 1997.

New York and New Orleans actually have very little in common to be honest with you. I would have loved to find parallels and comparisons but they are vastly different American cities. The thing is they do tend to attract some of the same people. So, it should have come as no surprise when I walked into The Dudes’ gathering and found Tami Lynn, NOLA songstress who’s performed with everyone from the Stones and Coltrane to Miles Davis and Sonny & Cher. She told stories of music legends, spoke about female empowerment and voiced her love for both the Big Apple and the Big Easy. I’ll admit I was homesick for NOLA, but between the music and musicians, the Mardi Gras adornments and the oysters, I did find pieces of home in my old city.

Then I returned to the warmth and humidity of my favorite place in the world and ate a big fat breakfast from Elizabeth’s complete with Praline Bacon ($6 and yes – it’s sugar-fried bacon). I loved the Redneck Eggs – Fried Green Tomatoes Topped w/ Poached Eggs and Hollandaise ($14) and the smiling friendly waiter who acted like he knew us. There’s no place like home… 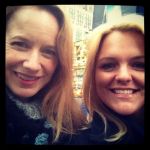 LA to NOLA reunion in NYC

4 responses to “The Big Easy to the Big Apple”