First of all – Who Dat?!? Not that any of it counts, but the Saints are 3-0 so far this preseason. With all those touchdowns, I’m sad to say it seems the Superdome is replacing the Ying Yang Twins Halftime (Stand Up and Get Crunk) as our Saints touchdown anthem in the Superdome. In my last post, I suggested a few alternatives as well as providing some context for the types of songs Saints fans and players seem to respond to. At the beginning of every game in the Dome, Saints fans get to relive the first game in the Dome after the Storm. Green Day and U2 were joined by New Birth, Rebirth and Trombone Shorty for their energizing The Saints Are Coming. It fills me with pride and gets me in the mood for victory every time. This VIDEO features footage from the concert that day.

UPDATE!!! Since writing this post, I chose my clear winner for a touchdown anthem: Black and Gold by Chadquentin and Phat Word. For more information about the song and why I chose it, click HERE. Here’s the video:

For a touchdown anthem, I like the idea of Team MF’N’s Rebuilt This City (On Black & Gold). L.A. ANIME, XMAN, Th_Professor, Bigshott Da Black Rhino and BIGREC are nearly the same team that did Heart Of The City (Who Dat), another great anthem. The chorus samples Starship’s ’85 hit We Built This City (on rock and roll) which makes for a great singalong with empowering new lyrics. But don’t let the sugary-sweetness of the chorus fool you, this song has menacing Who Dats and a good dance beat.

The VIDEO features footage from games, Drew Brees leading his huddle chant, fans celebrating, the Lombardi trophy and the victory parade. If you’re impatient, you can skip past the news story of the NFL fight over “Who Dat” added for context and go straight to the song starting at :20. The song’s time may have passed if the Who Dat Nation no longer wants to recount the past to get pumped for a win, but if I were to recut it for the Dome, I’d let it run from :20 to :43 then cut to 1:10.

Bring ‘Em to the Dome by Dee-1 & Shamarr Allen is another great touchdown anthem with Allen on horns and a hard-driving hip hop beat. There are plenty of Who Dats and a great chorus, “Bring ’em to the Dome and we gonna get it on. It’s our house!” The VIDEO has photos of games and the Dome.

5starhero’s New Orleans Saints 2013 Stadium Anthem is just that – an anthem perfect for the 2013 season. Though I love the horns and the singsongy chants of “Black! Gold!,” the chorus proclaims, “I want Moore! Graham! Sproles! Brees!” True – I do. But, the sad truth is players move on which builds an expiration date into the song. Also, chanting that after every touchdown would suck for Colston, Thomas and the many other players who make it to the end zone and those who help them get there. The VIDEO mostly shows footage from games and the song starts at :23 after a news item about coach Sean Payton being reinstated.

Imma Saints Fan is B LOVE’s anthem tailored for fans. This hypnotic song is really about us more than the team – about gearing up for game day, what we eat, where we come in from for games, etc. It opens with, “Get ’em up!” and I can see the Dome with their hands in the air. That said, I’m not sure I want our anthem to be all about the fans just after one of our athletes did something wonderful. The VIDEO runs candid footage of fans and games.

Dondrique “The Mayor” Lewis released his Official Saints Song in 2011. It’s got superfun dance music for a wide audience and chants of “Go NOLA, Go NOLA, Go!” but as fun as it might be to, “do the Meachem, do the Vilma, do the Drew Brees,” Meachem is already gone and the names will continue to change. The funny VIDEO shows game footage and a guy watching the game and freaking out.

There’s a lot to like about Mr. Ghetto’s New Orleans Saints (BLACK-N-GOLD ANTHEM) starting with the chorus, “This is New Orleans. We are the Saints. They can’t stop us. We do what you cain’t. We got heart, plus we got soul. Make way for the black and gold.” There’s a Dome dance cam opportunity with the command to, “Let me see your footwork,work, work – like you’re at a second line.”  The tune combines old school 80’s beats with chants of Who Dat and “We already got a ring. We want another one.” The VIDEO shows footage of Mr. Ghetto and fans outside the Dome and is shot much like his guerilla filmmaking Youtube bounce hit, Walmart AKA “Wallyworld.”

Saints Anthem by Govenor Reiss has Who Dats and a good dance beat with a great hook, “I love my city and I love my town. I love my Saints. They’re Super Bowl bound.” That’s not always easy  to sing during a bad season and the song has that same problem of mentioning specific player’s names – but there’s no denying it would be fun to sing and dance to after a touchdown. The VIDEO is just a static image with contact information.

Mike Bleed’s That’s My Team uses Drew Brees’ pre-game “Beat everybody, I’m in my own zone” chant as lyrics and has plenty of Who Dat callbacks. The VIDEO features game footage and a fun clip of Lance Moore dancing in the end zone then ends with a victory second line.

We Ready To Roll (SAINTS ANTHEM) by Big Zack is billed as the “New Orleans Saints Official 2013-14 Song.” Maybe so – it’s got Who Dats and the chorus has a great dance beat. The emphasis on returning to the Super Bowl might not work on a bad year, but I do predict this is going to be a good year. The VIDEO rolls photos from games.

New Orleans’s Saints by Margie Perez & the Team Players with Big Chief Monk Boudreaux probably isn’t our next touchdown anthem but every time you download the song, Team Gleason benefits.  It’s a fun song with horns and easy chorus chant, “Saints!, New Orleans Saints!” but the lyrics even admit, “When they play that crunk song, it never gets old.” There’s no video but you can purchase the song HERE.

Though I continue to hope we return to Crunking after touchdowns, there are so many more songs to choose from and I appreciate those of you who have sent some along. I leave you with I Believe by Harrison Ave featuring Angela Bell & Alvin Harrison. This cheerful boppy dance tune was recorded in 1980’s when it was far harder to believe the Saints could win a Super Bowl and continues to be played after victories in places like Good Friends Bar. The VIDEO runs footage from games and fans cheering their team on.

And if we do get on a roll to the Super Bowl, Rebirth Brass Band’s Do it Again is one of my favorite “back to the Super Bowl” songs. The VIDEO is just a static image and the song is mostly a brass instrumental, but I love the lyrics,  “We used to say Who Dat since way back when, now we say We Dat every time we win. You can write it down, take a picture, tell a friend. We already done it, we gonna do it again!” 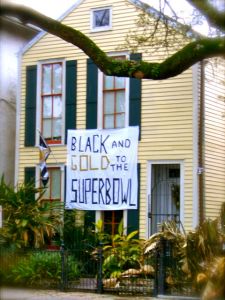