A 5-day weekend of costumes, parties and parades celebrating the LGBT community, Southern Decadence brings over 150,000 people and a nearly $200 million economic impact. We caught the tail of the rerouted Friday night parade but were there in plenty of time for the 41st Southern Decadence Sunday parade, an exuberant procession of dance troupes and pride groups in festive and fabulous costumes. This years theme of “Swimmin’ with the Gods and Goddesses!” was punctuated with lavender, lime and silver.

As usual, it was Hades-hot so I was glad to be watching rather than dancing with my Pussyfooter sisters. But I was delighted to find them lining up as we made our way to the parade’s start.

For us, this weekend’s decadence was mostly limited to food. In particular – food from Wink’s Bakery. I had the breakfast platter 3 days running and enjoyed bites of flavorful excesses like berry-and-creme-stuffed pancakes but it was the lunch we took home for supper that blew us away. Barbecue Cornish game hen, peas, cornbread and the most insane bacon mac-n-cheese I’ve ever had ever ever. Ever. And I wanna say it cost about $11. Dessert was a white cake with a chocolate shell, topped with candied pecans and butter cream icing. For me, that’s plenty Southern Decadence. 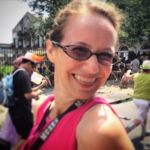 ready to lead the parade