Dukes of Hazard and Have and Have Nots‘ John Schneider has been at the center of a lot of my recent local films. We first met while riding in the floats of the 2014 Krewe of Orpheus parade. Local director Steven Esteb cast us as husband and wife in Hate Crime,  a wrenching movie about the consequences of shame and fear. Alicia Allain served as producer and sometimes-cook of traditional southern dishes. The movie also stars Amy Redford (Robert’s daughter), Kevin Bernhardt and local actor Jordan Slalom along with Johns’s son Chasen Schneider as our kid.

Part of Hate Crime was filmed at John Schneider Studios (JSS). A former church camp, JSS is a sizable plot of land with a bamboo forest, a river, a lake, a few swamps, woods, a baseball diamond, a neighborhood-sized pool, a giant barn where they staged a sold-out “Shakespeare in the Swamp” version of A Midsummer Night’s Dream and several homes, hangars and other structures. Schneider rents the property out and uses it as his own personal studio for the many films he’s been powering through.

John Schneider cast me as the wife of my Cold Moon husband, local actor Joe Chrest in Like Son then as a librarian in a scene with local discovery, teenager Maddie Nichols in Inadmissible. Both films are thriller dramas. We shot all around the property as well as at nearby schools and businesses. John often engages the community in his films and residents will find familiar faces in many shots and several more can be found behind the cameras.

While shooting SyFy’s Zombie Shark (during Cold Moon) last year, I worked with a great group of local filmmakers including director Misty Talley, cinematographer Matt S. Bell and producer Sam Claitor of Fable House. I was delighted they brought me back for this year’s offering, Ozark Sharks. Starring Allisyn Ashley Arm as my daughter and local Dave Davis as my son, the movie also reunited me with Cold Moon‘s Michael Papajohn – a local legend from his baseball days at LSU. Thomas Francis Murphy, Terence Rosemore, Ross Britz and local acting teacher Ashton Leigh were also cast. Ozark Sharks made excellent use of JSS’s property, shooting everywhere from the placid (but shark-filled) lake to the brambly hills in the woods.

Next up was Cut Off, a psychological thriller starring John Robinson as a NOLA-newcomer struggling with personal demons and his desire to find a home among strangers. NOLA-newcomer Jowan Carbin wrote and directed the piece starring William Baldwin, Brad Dourif, Jean-Marc Barr, Lew Temple and Louisiana-born Anna Margaret. Once again, I found myself in a beautiful old Louisiana home and mostly working outdoors surrounded by woods, rivers and creepy critters.

Once again, we’re shooting at JSS along with other local businesses and homes. This time, I’m even staying at the studio, sleeping in a room that sometimes serves as a set. The smaller the crew, the more hats everyone has to wear so it’s not unusual to find the make-up guy helping prepare a meal or the UPM washing dishes. Living at JSS brings the collaborative nature of filmmaking to a whole new level creating an even more tightly knit “family” with a wonderful upside of winding down around the fire pit after a long day.

Schneider and Alicia Allain often hire young people, newcomers and theatre actors and the on-set old-timer cast and crew train them as we work. It may take a little extra effort but they are building an army of willing, hard-working newcomers and us old-timers get to remember starting out and the people who helped us along the way.

Low budget filming in Louisiana may mean you get a tent instead of a trailer. You might find the robe you left on your chair covered in bugs when you return. The same mess hall where the crew eats may have to be redressed to become a church, a dining hall at a rest home, a Justice of the Peace’s wedding chapel or even the wardrobe department and equipment storage. You might have to wear rubber boots and carry an umbrella to get to set. But I feel like I’m part of something creative, beautiful and sustainable. Now, John Schneider and Alicia Allain are launching CineFlix, a Digital-on-Demand site as well as a film festival with a fresh approach to profit sharing.

I came to Louisiana having worked 18 years in Los Angeles. I’ll admit I like fancy trailers and easy living as much as the next guy but none of it improves the film people pay to see. I look forward to more big budget movies making their way back to Louisiana but I’m thrilled to be part of a community of storytellers who get to tell their stories their way, cast actors and not just stars and who are willing to wear as many hats as it takes to get an idea from script to screen. Support independent films, dare to live your dreams and, of course, stop content piracy. 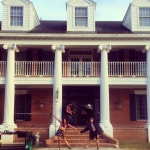 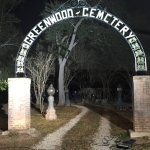 fire pit and “base camp” 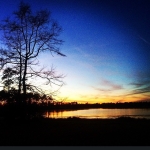 with John Schneider in Hate Crime

with John Schneider in Hate Crime

John Schneider, Alicia Allain and me as a Pussyfooter

my Cut Off trailer

Cut Off producers with Jowan Carbin

with Anna Margaret and Lew Temple

One Month Out script

shooting in the house at JSS

One Month Out cast and crew

sitting around the fire pit 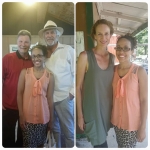 2 responses to “Independent Films in Louisiana”