With over 20 stages of regional music and MANY local food booths throughout the Quarter, French Quarter Fest (FQF) is easily my favorite fest of the year – which in saying something in a city with literally hundreds of annual festivals. This is the Fest’s 35th year and things keep getting bigger and more crowded, but it’s still free and that’s amazing. The weather was perfect – upper 70’s, breezy and sunny. The Irene Sage Band was playing Led Zeppelin when we arrived. I’ve written them into my next Charlotte Reade Mystery so it was a fun way to start the day.

New Breed Brass Band was next up. They are proof (along with Cha Wa – who play Friday) that the city’s musical future is in good hands. The saxophonist had an especially good show. Afterward, we went for my favorite Fest food, a Cochon de Lait from Walker’s Southern Style BBQ. We chased it with an Abita Beer then headed downriver for the Deltaphonics featuring Khris Royal. A saxophonist, I was surprised to see Khris Royal playing bass for many of the songs. The band also featured two entire drum kits with drummers. And a lead singer/guitarist. That’s it. But they sounded great and got the crowd dancing.

New Orleans is celebrating it’s Tricentennial. A tented area houses couches for lounging in the shade and  photos and stories from throughout the city’s history.

Our last show of the day was Miss Irma Thomas, the Grammy-winning Soul Queen of New Orleans. She did some favorites and greatest hits, took requests and led her classic second line with everyone in the crowd waving kerchiefs and napkins.

Then something amazing happened. Another local legend, Marcia Ball, joined Miss Irma and the band onstage. Miss Irma told a story about Miss Marcia and how she opened her home to the entire band during Katrina then they sang together. It was a moment.

Afterward, we headed to Jackson Square for more food. The lines there are usually ridiculous but we hit them near closing on a Thursday so we walked right up to the Muriel’s booth for a Crawfish and Goat Cheese Crepe ($7) as well as a Crab & Artichoke Citrus Salad ($8) and Slow Roasted Duck Po-Boy ($8) from Jaques-Imo’s Cafe. We ended the fantastic first day with a classic Baked Alaska with Chocolate Sauce ($8) from Antoine’s Restaurant then headed home to recharge for 3 more days of food and music! 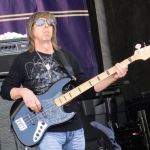 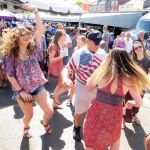