The month of Carnival parades just ended on the 5th but we were back in the streets again ALL weekend starting with the Molly’s (Jim Monaghan’s) Irish Parade Friday in the French Quarter. The Pussyfooters were invited to join in the festivities this year and I love any chance to dance. The weather was awful, cold and rainy, but we were grateful for inclusion in the lively second line.

Saturday, we met family at the Irish Channel St. Patrick’s Day Club‘s Irish Channel Parade. The parade features double-decker floats, dancers and bagpipers but the heart of the Irish Channel parade is the many groups of walkers exchanging silk flowers for kisses (mostly on the cheek). Often wearing black suits with green accessories – many in kilts, the over-1400 walkers include the Irish Channel Corner Club established in 1918, the Ancient Order of Hibernians founded in 1836 and the Law Enforcement Emerald Society. The Emerald Society invites law enforcement officers from all over the country to enjoy drinking in public and being applauded.

We enjoyed the fancy footwork of students from the Muggivan School of Irish Dance as well as the green-afroed women of Alter Egos, the wigged, blue-striped, plaid-kilted men of the Braveheart Warriors Marching Club and the Celtic Highlanders‘ rolling bar, the Rogue’s Lair. And we always love running into friends and neighbors like photographer and unofficial city ambassador, David Mora, and Saints kicker and non-profit founder, Thomas Morstead (The Leg).

For more history of the parade and its organizers, click here.

Super Sunday with the Mardi Gras Indians is next – my favorite photo day of the year! 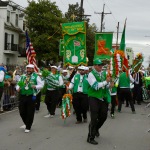 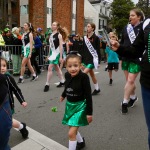 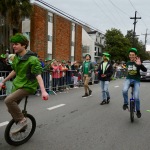 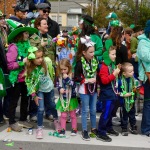 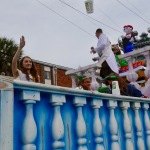 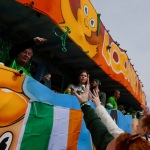 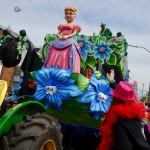 moving to a new spot for the ending 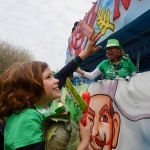 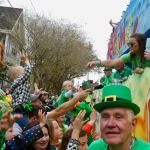