Super Sunday is easily one of my favorite days of the year as many of the Mardi Gras Indian tribes step out to show off their stunning suits of beads and feathers. I’m always humbled by the craftsmanship and dedication that goes into the staggeringly beautiful suits our neighbors spend the year carefully designing and crafting with elaborately beaded panels often portraying tales of battle and loss. Weighing up to 150 pounds and costing $3000 or more, the suits portray wildlife or a 3-D version of the Taj Mahal or even a tribute to things that “Ain’t dere no more” like the Jax brewery and the Saints “Dome patrol.”

The big surprise this year was the women. Queen Tahj of the Golden Eagles tribe created a gown rather than a suit. She worked her grandmothers earrings and brooches into her sequin top and her long skirt was beaded with the figures of women and children encircling her to represent her community and the concept that “it takes a village.” When we arrived, she was literally encircled by children hoping to get a photo with the innovative Queen.

Another woman went full showgirl with a super-glitzy long robe, its boa-trimmed train dragging on the concrete, and a headpiece dripping with crystals like a chandelier. Even Cinnamon Black turned her Baby Doll outfit into a Mardi Gras Indian suit with beaded panels on her minidress. The result of all these changes was that I felt included in a new way, represented somehow, and excited for whatever this evolution may bring for future suits.

The Golden Eagles’ Big Chief Monk Boudreaux, fresh from his recent nuptials, wore his wedding white. The Mohawk Hunters’ Spy-Boy Dow worked in a conquistador’s helmet and the Gang Flag Ghost of the Black Mohawks created a giant awe-inspiring wingspan. I’m so grateful these mechanics, cable guys and other “regular joe’s” imagine and execute the work-of-art suits, spending thousands and countless hours getting each suit engineered, ribboned, beaded, sequined and feathered. But photos are truly worth a thousand words – so enjoy!

Click here to read more about the origins of the Mardi Gras Indians and the battle for their right to parade. 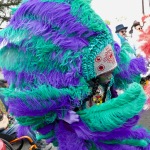 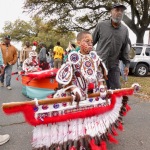 Big Chief Fi Ya Ya

Big Chief Fi Ya Ya 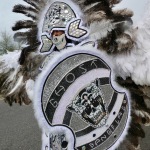