French Quarter Fest is easily my favorite festival of the year, which is saying something since we have hundreds of them. With over 20 stages playing indigenous music and 60 local food booths, the festival employs over 1,700 local musicians playing genres from funk, R&B and jazz to rock, gospel and Zydeco. The over 1,500 volunteers and various local companies handling sanitation, security, stages, sound, etc. and more insure that all of the money spent producing the festival remains within the local economy.

I was working on a TV show Thursday so I missed the first day of festivities – which really hurt when I saw the tailor-made-for-me music line up. We started Friday with the Soul Rebels. The fun and funky brass band got the crowd dancing – even doing the hand gestures for their hit, 504. We ran into DancingMan504 and got a shot of him doing his signature high jump.

During the break, we refueled with Crawfish Bread from Lakeview Harbor ($7) and my favorite fest food – the Cochon de Lait PoBoy from Walker’s Southern Style BBQ ($9) – AKA Love at First Bite catering. Dessert was original and rum pralines from Loretta’s Authentic Pralines ($4). We washed it all down with a discount-refill cup from Abita Beer.

The son of one of the original bluesmen, Little Freddie King was dressed sharp as a tack – as always. His blues are uncomplicated and cut to something pure, something connecting us and demanding our hips move. Little Freddie King is truly a national treasure and gave a heck of a show – including Mardi Gras Indians!

Not only are there stages scattered throughout the French Quarter, our local street musicians are out in full effect during the fest. We stopped to hear Tanya Huang – an extraordinary violinist worthy of any symphony who chooses to also play pop, classic rock and even rap.

We took a break from the Fest by ducking into M.S. Rau. We have family visiting so it was exciting to share the extraordinary treasures displayed in the finest (and funnest) antique store I’ve ever visited. Between the complicated lock box, the dazzling jewelry, the self-playing instruments and paintings from artists like Monet and Norman Rockwell, there was something for everyone.

We made our way down to the stages at the Old U.S. Mint for the all-female Original Pinettes Brass Band. I was delighted to spot the trombone-toting kid from Satchmo Summerfest 2018 up on the stage working on his skills again. I’m so curious to find out where all of his stage experience will lead. Perhaps he’ll be like Big Chief Monk Boudreaux’s grandson who’s band Cha Wa played Thursday and was just nominated for a Grammy. Or maybe like one of the many family legacies like the Andrews, the Nevilles, the Bouttés, and on and on that apprentice generations. Or a festival producer, or who knows? I’m definitely paying attention. I always love the talented and energetic Pinettes and wouldn’t have missed them despite having to cross the Quarter twice.

Heading back to the river stages, we stopped at the Zydeco stage for Sunpie and the Louisiana Sunspots then onward to the Soul Queen of New Orleans, Miss Irma Thomas – another can’t-miss concert. With a song library spanning back to the 50’s, her shows are a trip through our country’s evolving tastes.

We grabbed some Fried Green Tomatoes with shrimp remoulade ($9) from Cafe Dauphine and another Walker’s Cochon de Lait PoBoy then stayed for John “Papa” Gros. It had been a long day with lots of walking and plenty of dancing but I couldn’t keep still for the band’s funky, upbeat originals. 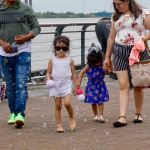 Sunpie and the Louisiana Sunspots 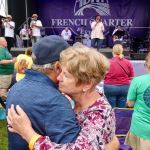