Fat Tuesday – Mardi Gras in French – splits the city into parade-goers and costumers. Parade-goers attend the Krewe of Zulu and Krewe of Rex parades. Diehards stay for the long procession of truck parades – basic floats with no bands or dancers.

We’re costumers. Fat Tuesday ties with the Mardi Gras Indians’ Super Sunday for my favorite day for photos. For my husband, it’s simply his favorite day of the year. He spends weeks conceiving and preparing his ideas, but this year he took things to another level. His Hard Rock Hotel protest/memorial costume elicited a few cries of, “Too soon,” but most people said something I’d never heard before, “You won Mardi Gras.” It’s not a contest, but we couldn’t go 4 feet without someone stopping him for photos.

I felt like I was back in my celebrity girlfriend days, only the “star” was a guy dressed as a crumbling building with the names of dead men on his back. Sometimes we’d run into blind building inspectors or inspectors with money in their pockets. They’d try walking with us  but never made it more than a block when they realized how often they’d have to stop and pose.

There were a lot of parking enforcement camera costumes, some Corona viruses, a couple The Dudes, and a lot of free-for-all color and creativity explosions. I loved the group of Janets from The Good Place, the Marty Gras group of Marty Mcfly’s, and the various people dressed as sweet treats like candy, ice cream, King Cake and snow-balls.

Everywhere else it’s just Tuesday, but in New Orleans it’s the fireworks finale of  a month of festivities culminating with 7 straight days of parades. We joined in a parade of walkers, danced to a brass band, and ran into friends, neighbors, and a few of my Pussyfooters sisters. I love all the fun and fabulous costumes, but sharing parts of the day with friends is often the best part of Mardi Gras.

I cut the photos as much as I could but I’m hoping the bounty of images makes you feel like you’re there! I also included a few shots of my Mardi Gras tree and some of the throws we caught this season. 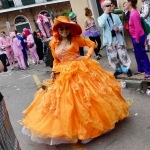 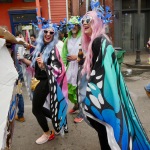 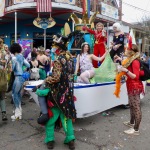 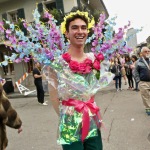 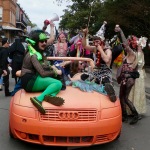 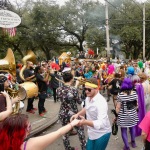