As I mentioned in my last post, New Orleans has been staying home since before St. Patrick’s Day and it’s been a huge adjustment for this community-oriented tourist destination. This time of year, there are well-attended festivals and second line parades every week. The constant flow of visitors and convention attendees fill our hotels and flood our streets, restaurants, bars, parks and venues. I’ve accepted the loss of it all fairly well but today would’ve been the first day of my favorite festival of the year, French Quarter Fest.

The 4-day fest stretches from one end of the Quarter to the other with over 20 stages playing indigenous music, and 60 local food booths. The festival generated $190 million for the local economy last year. It’s a lot to let go of – dancing, eating and drinking with the mighty Mississippi as a backdrop. Singing along to local favorites, running into friends and neighbors, carelessly laughing and hugging.

The over 1,700 local funk, R&B, jazz, rock, gospel and Zydeco musicians are home, as are the over 1,500 volunteers and various local companies handling sanitation, security, stages, sound, etc. So, today was the first of 4 days that will be a little harder to normalize than usual.

I like reliving good times so here are last year’s posts. I missed Thursday last year to film a couple of fun episodes of Pop TV’s Hot Date (season 2, episodes 2 and 10). 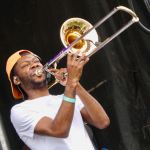 Sunpie and the Louisiana Sunspots

Johnny Sketch and the Dirty Notes

Johnny Sketch and the Dirty Notes